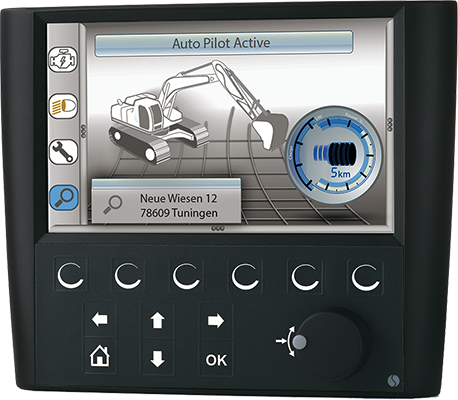 The D3510-1 is a compact operating and control unit with 7" display for surface mounting, equipped with 12 illuminated tactile keys and a rotary pushbutton encoder. Communication takes place via four independent CAN interfaces, one of which is galvanically isolated, an RS232 interface, as well as an Ethernet interface with data rate 10/100 MBit/s.
Over 16 digital and 8 analog inputs are available for the acquisition of sensors. For the control of actuators over 18 digital PWM outputs and one analog output are provided. Four camera inputs are used for simultaneous monitoring of two video streams.

The application is downloaded to the device via the USB 2.0 host interface, Ethernet or CAN.